“The high-sounding song of Homer, the sweet notes of Virgil, the stirring narratives of Xenophon and Caesar, the denunciation, the suasion, and the arguments of Cicero, heard no more in the native land of the philosopher, were familiar sounds on the air of Athens.” 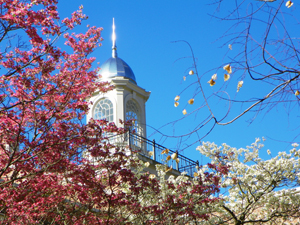 So William Meigs describes Athens, Georgia, in the early days of the University, during the presidency of his great-grandfather, Josiah Meigs when orations at commencement were often delivered in Greek or Latin. Classical languages formed the core of the curriculum when UGA, the birthplace of higher public education, opened its doors in 1801. UGA President Josiah Meigs was also Department Head of Classics from 1801-1810. Today, the reach of UGA Classics extends beyond Athens, Georgia to Europe with our study abroad programs that take students to Greece, Italy, France, England, Scotland, and Spain. Across campus, the Department continues its centuries-old mission at UGA to explore Classical Antiquity and its reception with students of all colleges and majors.