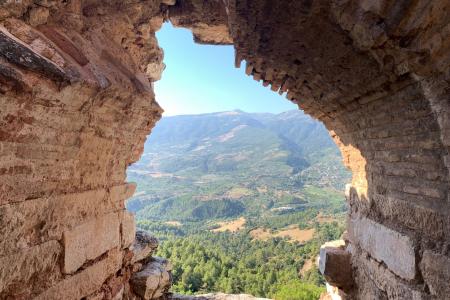 Dr. Jordan Pickett spoke last week about the archaeology of epidemics -- past and present, including CoVid19 and the Justinianic Plague -- on the Infectious Historians podcast, produced by colleagues Lee Mordechai and Merle Eisenberg from the Princeton Climate Change and History Research Initiative. Give it a listen! Topics addressed include mass burials, paleogenetics, osteoarchaeology, and the material culture of cities as windows into epidemic events from the past. 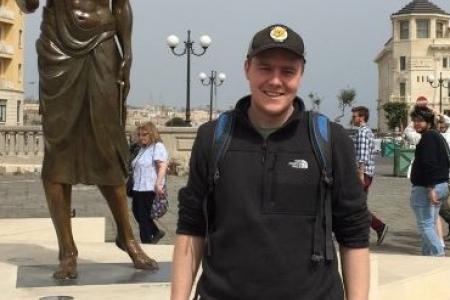 UGA Classics Summer Institute classes met online this year. Among students enrolled: first-year MA student Cooper Hemphill. The following is a Q&A with Cooper (photo in front of a statue of Archimedes in Siracusa, Sicily).

Where is your home? School? What subjects and ages of students?

I grew up in western Massachusetts and I am currently a Latin teacher at Cardigan Mountain School in Canaan, New Hampshire, which is a school for students in grade 6 through 9. I teach all four grade levels in our first and second year Latin courses.

What drew you to your subject and to teaching? What books, events, artists, travel, teachers influenced you? Why did you choose Latin specifically?

Both of my parents are teachers, so I was drawn into the world of education from a young age, and after trying it for myself I knew right away that it was something I loved. I began taking Latin in sixth grade, thinking that I would take it for a year or two and then switch to a modern language; however, as the years went by I couldn't pull myself away. Something about the language spoke to me and I quickly became hooked. I have always liked learning Latin, but it was actually an English class, really an English teacher, who caused me to develop a passion for the ancient world. In high school I took an English class called 'Ancient Epic' where we read ancient stories from Gilgamesh to Homer and Vergil. Our teacher, Mr. Cooley, was so enthusiastic and passionate about what we were reading that he really brought to life the beauty and significance of these works. He told us that in order to pass his class we needed to both travel to Greece and send him a postcard once we got there. While this was clearly not an actual class requirement, it was just one of the ways that he showed us just how important to him it was that we engaged with the class and, more importantly, how happy he was to be teaching a subject that he loved so much. Mr. Cooley's enthusiasm combined with reading Homer and Virgil's poems made me certain that I wanted to continue in the field of Classics.

You have taught Pre-Algebra to middle school students and tutored students in Calculus at your alma mater, Bowdoin College. Have you found study of Latin, Classics, and the ancient world applicable to your studies in mathematics and in teaching math to students?

Math and Classics complement each other very well, and I fully believe that my teaching of each subject has been improved by my study of the other. When I first taught Pre-Algebra, I was amazed to see how similar it is to teaching introductory Latin; the logic used to translate English to Latin and word problems to algebraic equations is strikingly similar. In addition, in college I was able to do some projects that combined both subjects where I looked into mathematical proof in the ancient world, ancient numerical systems and Greek geometry. I have definitely found this research useful when teaching math; I love talking about ancient number systems and geometers. However, I have found my study of math more helpful to my study of Classics; I think that mathematical thought, and in particular how ancient Greeks and Romans applied mathematical proof to nature greatly influenced their perception of the world.

With regard to your experience as an athlete in high school and college in golf, soccer, hockey, working as a coach, and serving as a sports editor and writer for your college newspaper: how have your outside interests in sports and other areas influenced your life and work?

Sports have always been a big part of my life, and wanting to be a coach is a huge part of why I wanted to be a teacher. I love sports and coaching but coaching also provides an opportunity to work with students outside of the classroom. Through athletics, students are given a different environment to grow and work through problems away from the stress of academic work. It is also so important for students to see teachers outside of their usual roles and it has been an amazing experience to share my passion for soccer and hockey with my students. 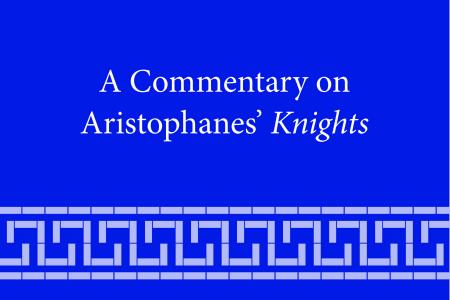 Forthcoming May 2020
University of Michigan Press

A Commentary on Aristophanes’ Knights presents a fresh look at the play that cemented Aristophanes’ reputation as a rising star in comic theater. Knights offers an examination of social and political life in ancient Athens during the empire-destroying Peloponnesian War, as well as giving us Aristophanes’ comic send-up of the dangerous populist demagogue Cleon. This is a thoroughly modern commentary on a key play in the theatrical genre of Old Comedy, which satirized virtually every aspect of Athenian life in a period when Athens was at the height of its power and international prestige.

In addition to the complete Greek text and commentary, this volume includes a substantial introduction to the playwright’s career and to the historical and political background of the play. It includes advice for students on grammar and syntax, meter, festivals and staging, as well as topical and literary references and allusions that will help guide students to a mature appreciation of the comedy’s humor, seriousness, and artistic quality. Priced and sized for classroom use, this is the first full commentary on Knights since 1901 and will be widely welcomed. 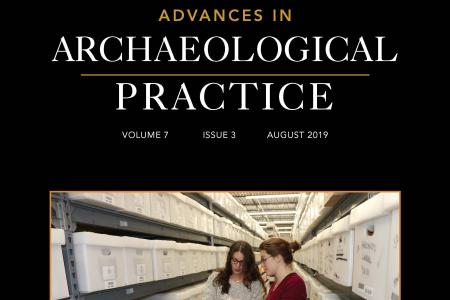 Nikki Vellidis, UGA Classics 2019 alumna and former Eta Sigma Phi, Zeta Iota President, appears on the cover of the August issue of Advances in Archaeological Practice, journal of the Society for American Archaeology. The cover accompanies an article about current work at the UGA Laboratory of Archaeology: "Long-Term Legacies and Their Challenges in the Age of Modern Curation at the University of Georgia": https://www.cambridge.org/core/journals/advances-in-archaeological-practice/article/longterm-legacies-and-their-challenges-in-the-age-of-modern-curation-at-the-university-of-georgia/CF81413B5A5583A38C6F5738D5FFE0F7 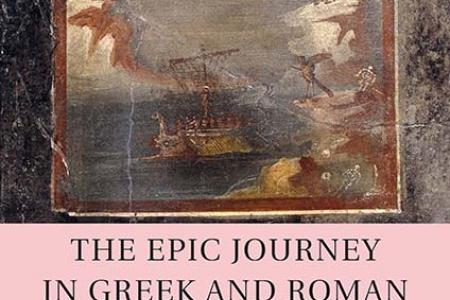 The Epic Journey in Greek and Roman Literature

From cover: This volume explores journeys across time and space in Greek and Latin literature, taking as its starting point the paradigm of travel offered by the epic genre. The epic journey is central to the dynamics of classical literature, offering a powerful lens through which characters, authors, and readers experience their real and imaginary worlds. The journey informs questions of identity formation, narrative development, historical emplotment, and constructions of heroism - topics that move through and beyond the story itself. The act of moving to and from ‘home’ - both a fixed point of spatial orientation and a transportable set of cultural values - thus represents a physical journey and an intellectual process. In exploring its many manifestations, the chapters in this collection reconceive the centrality of the epic journey across a wide variety of genres and historical contexts, from Homer to the moon. 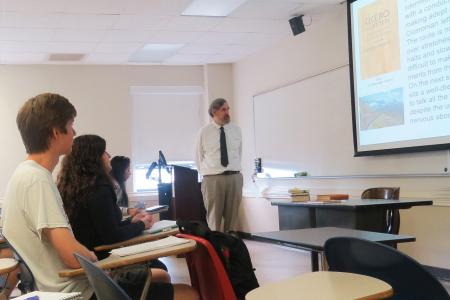 UGA Classics Professors Christine Albright and Peter O'Connell at the UGA-Tennessee football game. Albright was recognized on the field as the 2017 winner of the Richard B. Russell Award for Excellence in Undergraduate Teaching. 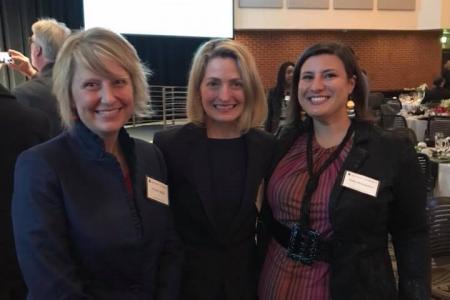 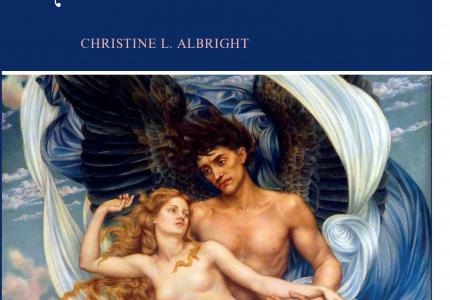 A Reader for Students in Elementary College Latin

From cover: The book features thirty compelling stories, graduated in difficulty and adapted from Ovid's epic Metamorphoses into prose. The original poem contains many different stories united thematically by the transformation which occurs in all of them; the epic features romance, seduction, humour, violence, monsters, and misbehaving gods.