My research focuses on Death, Classical Reception and Metatheatre in the staging and viewing of spectacle entertainment:  The Spectacular Dead: The Theatricality of the Dead in Classical Antiquity (Bloomsbury, 2025) explores the staging and viewing of Roman corpses from antiquity to contemporary funerary practices and museum displays, asking the question, "Is a corpse art?" A Cultural History of Death: Antiquity, ed. Mario Erasmo, is part of a multi-volume series (Bloomsbury, 2022) that assembles leading scholars who examine themes of dying, disposal, and commemoration in multiple volumes from Antiquity to the Present.  In Death: Antiquity And Its Legacy I.B.Tauris/ Oxford University Press Ancients and Moderns series (2012), I explore how ancient death rituals inform and engage modern funerary rituals, burials, and commemoration. This book expands upon my Reading Death in Ancient Rome (Columbus, 2008) which examines death ritual as a cultural intertext of epitaphs, drama, and epic to analyze authorial agendas that are often at odds with actual funerary rituals.

The potential for theatre space to elicit scripted and unscripted actor and audience responses is explored in Roman Tragedy: Theatre to Theatricality (Austin, 2004) that was the first monograph devoted to Roman tragedy in over 125 years. I focus on the reciprocity between the reality of the theatre, actual and figurative, and the audience. I take a semiotic approach to explore the inter (and intra-) textuality of theatre texts and performances within their cultural contexts from the founding of the Roman theatre to its evolution as metatheatre in the Late Republic and Early Empire. Seneca's tragedies create metatheatre through intertextuality with other literary genres, including epic: "The Argo Killed Hippolytus: Roman Tragedy in the (Meta-) Theatre." Brill's Companion to Roman Tragedy, ed. George W.M. Harrison (Leiden, 2015). Most recently, The Theatre of Pompey: Staging the Self through Roman Architecture (AAR 65 2020) examines the portraiture of space in the opening games of Pompey's Theatre. 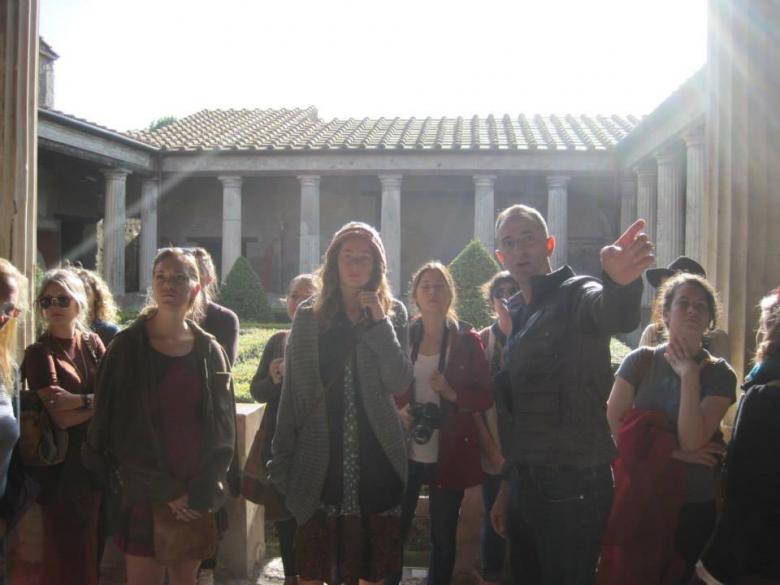 Strolling Through Rome: The Definitive Walking Guide to the Eternal City (2015) and the companion walking guide Strolling Through Florence: The Definitive Walking Guide to the Renaissance City (2018) take visitors step-by-step through the eras and areas of the cities to experience first-hand the historical reception of Classical antiquity, from art and architecture to urban development. I lead tours throughout Italy and Europe on the Europe Unearthing the Past UGA Classics study abroad program and occasionally on UGA Cortona. Itineraries contextualize the reception and influence of ancient art and architecture from the medieval period to the present. The Parthenon Sculptures debate informs visits to the New Acropolis Museum in Athens, Greece and the British Museum in London. Tours also follow in the footsteps of Grand Tour visitors at ancient sites, museums, cemeteries, and villas to trace contemporary cultural resonances of the collection of ancient art and the legacy of Neoclassicism in Europe and North America.

Archaic Latin Verse (Focus Publishing, 2nd edition: 2004) is a text and commentary edition of Latin verse from carmina to the historical epics of Livius, Naevius and Ennius, including selections from the earliest Roman tragedies and comedies, and fragments from the satires of Lucilius. Commentary notes contextualize the passages within their cultural contexts and anticipate their imitation by later dramatists and Augustan and Silver Epic poets with their own political and cultural agendas.

Dead Vergil from Statius to the Grand Tour: Death in the Epic and (Sub-) Urban Landscape of Rome and Naples.

How to Reach Us